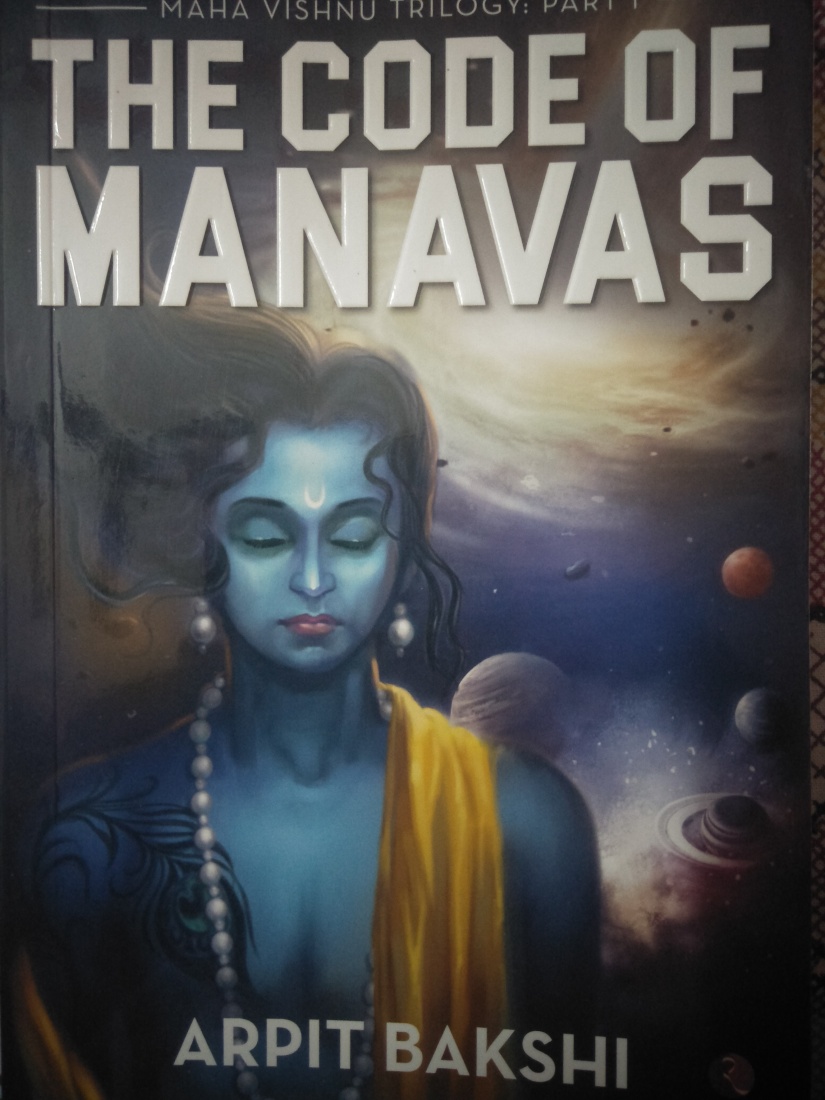 “I am not one of those who gets demoralized by anyone’s words or actions.I carry a sense of conscience,and do what i believe in”.

#blurb: Book one of the Maha Vishnu Trilogy, The Code of Manavas, is set some two million years past ad 2050, when earth as we know it ceased to exist and so did mankind. A new race, the Manavas, now exists on Bhoomi, the erstwhile Earth, which is divided into two cities—Madhavpur and Ayudhpur. In the quiet and peaceful city of Madhavpur, a reclusive Krishna is busy with an immense task. He has to prepare a new abode for the Manavas before an impending apocalypse destroys them. He knows something that nobody else does—the Manavas are running out of time faster than they can imagine and there are no inhabitable planets to escape to. To make matters worse, there is someone in Madhavpur who wants to destroy Krishna and subjugate each Manava. The Manavas, it seems, are doomed. Yet Krishna knows there is a slim chance of survival for the Manavas, although there is a huge price to be paid for it. Will the various factions of the Manavas unite for the greater good? Will Krishna, who saved them during the turn of the last Yuga, be able to save them now? What will be the price to pay? Enter the mythical world of Maha Vishnu and get swept up in a fast-paced suspenseful narrative.

I received a copy of the book through the BOOK GENIE REVIEW PROGRAM https://www.instagram.com/thebookgenie/ in exchange of an honest review

The book is an amalgamation of two different genres-sci-fi and mythology. The story is set about two million years past 2050 in the Swarnim Yuga and the planet Earth is now known as Bhoomi where the Manavas recide. Manavas are evolved form of humans and have achieved immortality. The protagonist of our story is the chief scientific advisor Krishna who is an embodiment of lord Krishna and is in search of a new planet for the Manavas as the Bhoomidium level was dropping and soon Bhoomi won’t be able to sustain life. He finds a planet, Prithvi with suitable environmental conditions and starts his research on the planet and begins to examine it when another threat dawns upon them. Someone from their own clan wants to destroy the Manavas. Will Krishna be able to find out the deceiver? Will they be able to move to Prithivi? The question remains..

The book is an intriguing read with a unique plot and an appealing storyline. Though the first few pages pages of the story seemed dull towards the second half the book picked up its pace. The characters are well built and named based on the various names of Lord Krishna. The concept is new and fresh where elements of sci fi and mythology is mixed together to build up a enthralling tale of action and suspense. The twist and turns keeps you hooked till the end. The language is not that easy and there are several mentions of scientific terms which may confuse you but the glossary at the end of the book is really helpful. The book is Part 1 of Maha Vishnu trilogy and once you finish it the climax will leave you waiting eagerly for the next part. The narration style is crisp and engaging which makes the book all the more fascinating. I would recommend this book to all the lovers of mythology and sci-fi out there. Do give this book a read.