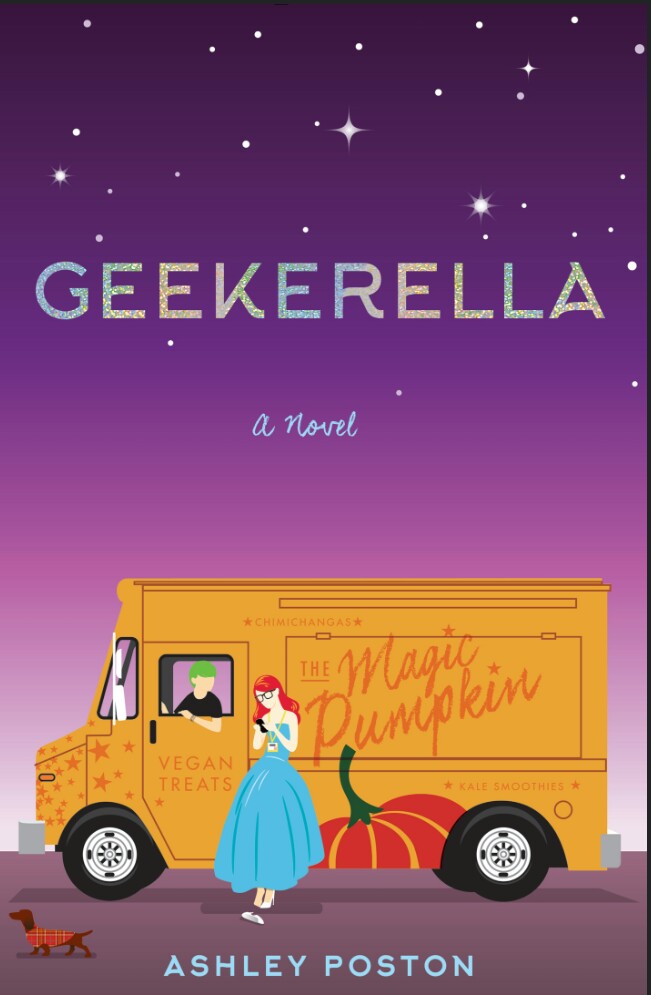 #blurb: Geek girl Elle Wittimer lives and breathes Starfield, the classic science-fiction series she grew up watching with her late father. So when she sees a cosplay contest for a new Starfield movie, she has to enter. The prize? An invitation to the ExcelsiCon Cosplay Ball and a meet-and-greet with the actor slated to play Federation Prince Carmindor in the reboot. With savings from her gig at the Magic Pumpkin food truck and her dad’s old costume, Elle’s determined to win – unless her stepsisters get there first.

Teen actor Darien Freeman used to live for cons – before he was famous. Now they’re nothing but autographs and awkward meet-and-greets. Playing Carmindor is all he has ever wanted, but Starfield fandom has written him off as just another dumb heartthrob. As ExcelsiCon draws near, Darien feels more and more like a fake – until he meets a girl who shows him otherwise. But when she disappears at midnight, will he ever be able to find her again?

Part-romance, part-love letter to nerd culture, and all totally adorbs, Geekerella is a fairy tale for anyone who believes in the magic of fandom.

It’s a modern day Cinderella retelling created by Ashley Poston.The herione of the story is Elle,a simple geeky girl, who after her father’s death lives with her kind-of-jerk step-mother Catherine and two step sisters Chloe and Calliope, Chloe is a classic mean girl whereas Cal is not that bad at heart.Elle is a die-hard fan of Starfield and later on we come to know that her father was the creator of Excelsicon..Darrien,budding actor is casted for the role of Federation Prince Carmindor in the new Starfield movie which is not taken well by the Starfield fandom.He is extremely goodlooking and has a great body alongwith a kind heart. Elle and Darrien starts to fall for each other via texts without even meeting each other in real. In the story, Sage, Elle’s friend kind of plays the role of fairy god mother for her and recues her from various difficult situations.Elle and Darrien finally meet at the Excelsicon but do not recognise each other at first. When they finally do, Elle has to leave as it is getting late and her step mum would be angry.But as we all know the Prince always finds back his Cinderella, so does Darrien.

Overall it’s a very cute,fun and fluffy read with all the fandoms,cosplays,starstruck and what not. Geekerlla, a very popular fairy tale twisted with modern touch doesn’t disappoint you. Ashley Poston has done a brilliant job with the Cinderella spin off which brings back the memories of our childhood. She also brings out the difficulties and loneliness which most of the youngsters face but is not talked about.Even with a horrible step mom and without the presence of her father Elle fought bravely against all the odds. Don’t miss to give this adorable book a read💞