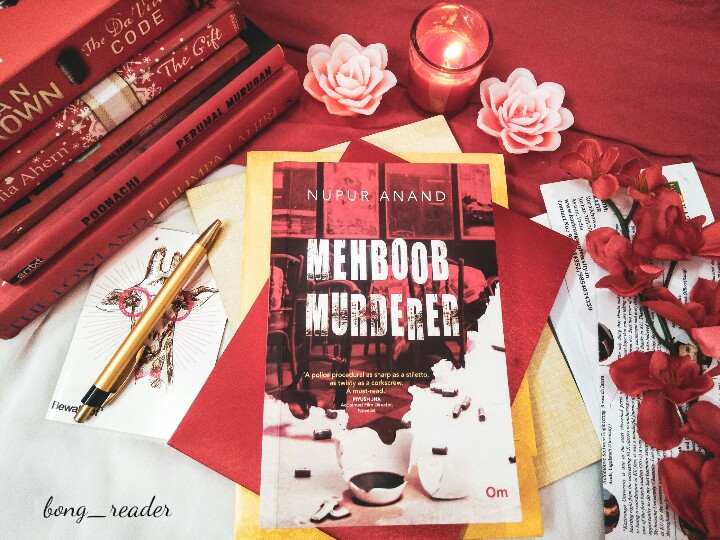 #blurb: On a rainy September night, six people are gunned down mercilessly in an old Parsi café in Mumbai. The mass murder at café Mehboob, located barely a few hundred metres from the police station, and Right next to one of the busiest Railway stations in Mumbai, jolts the city out of its complacence. The media immediately swings into action, while political pressure mounts on the police force to nab the mass murderer. With everyone eager to place the blame of the murders on a madman in a bid to have the case dismissed swiftly, the headstrong Inspector intekhaab Abbas is determined to get to the bottom of the murders. On probing the lives of the victims, he stumbles upon a heady cocktail of love, lust, jealousy, betrayal, rage, longing, misery and ecstasy. Mehboob murderer, nupur Anand’s debut novel, unravels a stunning truth neither the police nor the reader is prepared for.

Six people have been shot down at Café Mehboob in Mumbai. While the police suspects it as the work of a madman, the lead officer appointed  to this case i.e, Abbas, is against the popular belief and feels there is something more deep which leaded to this mass murder. They have to solve the case within two weeks or it may hamper their jobs. The public won’t forgive them if they don’t arrest the murderer within the given time. When a background check is done on all the victims it comes up that all of them have a dark past thus leading to several suspects. But all the suspects has an alibi. Abbas is working hard to find the killer  even though his love life is going through a rough patch. Although they come up with several leads, Abbas decides to follow up on the one which has been neglected the most. And what he finds next shocks him to the core. Who is the mehboob murderer? Grab the book to find out.

The book is well written with a gripping plot which keeps you guessing till the end. It is filled with twists and turns which will amaze you. Moreover the background stories of the victims make you question humanity. They are so heinous and disturbing and leave you feeling miserable. The characters are well casted and my favourite is Abbas, a intelligent and dedicated policeman. The language used is simple and easily understandable. It is fast paced and can be finished in a single sitting. If you are a sucker for murder mystery just like me then you are in for a great treat. Also it being the debut book of the author, she surely deserves all the appreciation for weaving such a great suspense. I recommend this to everyone out there. P.S the story finishes off with a cliffhanger and I really happy to know that there are talks of a second part.